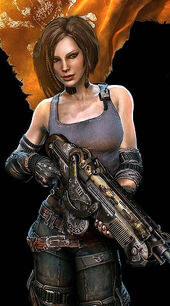 Trishka “Lovely Bitter” Novak (voiced by Jennifer Hale) is the daughter of a human rights leader who was coldly assassinated and the tritagonist of Bulletstorm. Even though she doesn't remember it, she was saved by Gray and his men when the police stormed the building after they had assassinated her father, she dedicated her life to becoming an elite assassin herself, so that she might one day find her father’s killers and pay them the hell back. To this end, she joined Final Echo, the première covert squad in all the colonies, led by General Sarrano. Trishka is a Final Echo Squadron Commander and one of the most deadly assassins in the universe; a tough, fierce soldier with a “no bullshit” attitude. Even though she looks like a cold-hearted killer, she develops a soft spot for Grayson Hunt close to the end of the game, and even considers him a friend.

During the events of the game, Trishka becomes a prominent figure. After Grayson Hunt attacks and strands all of the survivors of the Ulysses, he and Ishi Sato realize that the only way off planet Stygia is to gain access to the jumpship that is en route to rescue General Sarrano and any other Confederate survivor. However, due to their past altercation with General Sarrano, both come to the conclusion that the only way for them to use the jump ship is to see if Trishka will vouch for them. They track her location using her Final Echo Leash, but when they reach her, she is extremely hostile to them both, threatening to kill their dicks. Grayson for murdering all of the innocents on the Ulysses, and Ishi for cooperating with Grayson and she leaves them both to follow her. When the two catch up to her, they kill several creeps to save her, but she kills the final creep and prepares to shoot Grayson, explaining that she will kill him, not just for the Ulysses, but for the bounty that Sarrano had put on the Dead Echo squad for all the atrocities they have committed under his lead. Before she can, Grayson and Ishi disarm her and explain that Sarrano has deceived everyone. Believing them, Trishka follows the two to Sarrano.

While en route to Sarrano's location, Grayson and Ishi reveal to Trishka, who reveals her last name to be Novak, the same that Sarrano used Dead Echo to kill earlier in the game, that Sarrano was behind Bryce's murder. When the trio arrive at Sarrano's location, Trishka interrogates Sarrano about her father. Sarrano, to save himself (and to a lesser degree, Grayson and Ishi), pushes Trishka off the building they are on. After Grayson, Ishi and Sarrano return to the Ulysses and Sarrano betrays the two, Grayson and Ishi are about to die from a fire in the DNA bomb room. Trishka arrives, revealing that she caught a power line on the way down the building and saves the two from burning to death. The trio make their way to the dropship picking Sarrano up. When the three encounter Sarrano for the final time, Trishka learns that Grayson was the one who unfortunately murdered Bryce. When Ishi sacrifices himself to save Grayson and Trishka, Sarrano sends the two back down to Stygia with an escape pod. The two realize their fate but come up with a plan. They will use the escape pods still left on the Ulysses to ride the DNA bomb's shockwave to get out of Stygia's atmosphere and escape the planet. They run back to the Ulysses, combating Heavy Echo squad that Sarrano sent to kill them with, who realize the same idea as the two and as the Pod's door is closing Grayson kicks a soldier out and launches the pod. As the two look out at Stygia while in space, Trishka forgives Grayson for her father's death. Both of their fates are still unknown. 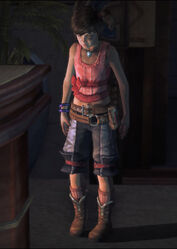 Young Trishka
Add a photo to this gallery
Retrieved from "https://bulletstorm.fandom.com/wiki/Trishka_Novak?oldid=12112"
Community content is available under CC-BY-SA unless otherwise noted.