This article is a stub. You can help Bulletstorm Wiki by expanding it.

Stygia is the setting of the game Bulletstorm. It is inhabited by giant man-eating plants, mutants, and cannibalistic gangs. It used to be a luxurious vacation spot for humans, but was run in part by convicts looking for shortened sentences. The "workers" (convicts) revolted and destroyed the radiation filters that gathered and neutralized the radiation from the planet's gamma storms, causing radiation to build up on the surface and mutate the planet's wildlife.

Once a fertile world that was rich with peaceful inhabitants, Stygia was built and maintained through the work of convicts, in an effort to reduce costs. However, the company then began storing radioactive waste created by the gamma filters in the area the convicts lived in, causing mutations, sickness, and death, which led to the revolt. 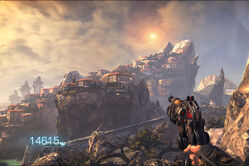 Scenic view of Stygia
Add a photo to this gallery

Retrieved from "https://bulletstorm.fandom.com/wiki/Stygia?oldid=11947"
Community content is available under CC-BY-SA unless otherwise noted.