Start a Wiki
The Skulls are a gang of bandits on the planet Stygia and are made up of convicts or convict labor. They are the first enemies you encounter. They are at war with the Creeps.

There are different types of Skulls, including Shotgunners, Berserkers, and the Minibosses. The Skulls seem to have access to military grade weapons from the Confederation's operations there and access to vehicles which gives them an advantage against the Creeps, since they have access to the fuel sources from scattered uranium mines throughout the wastelands. The uranium mines are also used for making explosives for bigger weapons. The Skulls also seem to have more manpower.

The standard weapon for the Skulls soldier is the Peacemaker Carbine, which they acquired from the Confederation's operations, the most known was Operation Anarchy. They're also in an effort to conserve ammo; the Skulls equip their hunting and foraging parties with knives, makeshift hatchets, or simple pipes due to the fact that their war with the Creeps are draining resources. Other Skulls carry everything from Bonedusters and Bouncers to Chainguns and Penetrators.

The vehicles that the Skulls have give them a huge advantage with the Creeps since they don't have vehicles. The Skulls have two airborne vehicles: the Vulture, which is a VTOL capable gyrocopter, and the Banshee, a military-grade helicopter primarily used for transporting troops into battle. The Banshees are armed with two torpedoes, several rockets, and a Chaingun in addition to any troops able to fire out of the doors with conventional firearms. The Skulls also use an unnamed, armored Jeep, which acts as their APC.

The Skulls are the most common enemy; the player will face them in almost all acts and chapters except in Act 7, Chapter 2.

The Skulls seems to have a caste of ranks, ranging from Infantry and Berserkers all the way to Miniboss.

Skull Infantry are armed with the standard issue Peacemaker Carbine and have many different appearances. These differences range from hairstyles to clothing and armor. Some even have different face and body paint.

Berserkers are usually encountered first in a large battle as they fearlessly charge towards the player when the are spotted. They are recognizable with their distinctive face and body paint ranging from yellow to neon green. They wield two weapons (pipes, wrenches, makeshift machetes) and attack the player in numbers, which can pose a serious threat on a higher difficulty. They will always yell while charging. Later in the game Berserker will attach a puffball on their mouth, giving them extra adrenaline. This allows them to take more punishment and deal more damage. If you shoot one of these Berserker's in the head, puffball gas will seep out and infect anyone nearby.

Skull Shotgunners are larger than normal Skulls and are armed with Bonedusters. Their faces are covered with a somewhat buffalo-like skull which offers extra protection and they wear vests lined with Boneduster shells. Due to their size and masks, Shotgunners can take more damage. They will charge if you get in range of them and kick you instead of shoot, especially in close quarters.

Flailbombers are easy to spot in the battlefield. They wear explosive bandoliers on their chest that glow bright red and they carry Flailguns over their heads when they charge, making it even easier to shoot their chests. If shot, the explosive bandoliers will explode, decimating anything and anyone nearby. Unaware players can easily be killed if Flailbombers aren't taken care of quickly, however, as they will ensnare the player once they get in range.

Skull Flaregunners are very agile and can avoid leash grabs but not kicks. They all wear a glowing orange helmet which offers them some additional protection and their weapon of choice is the Screamer. They never use its primary fire, instead only shooting flares, hence the name. They also serve as somewhat of a scout for the other skulls, firing flares into the air when the player is spotted.

Sluggo is the only member of the Skulls that's addressed by name.

Skulls, unlike the Creeps, tend to cover their turf with well painted graffiti usually in the form of a skull or the word "SKULLS". 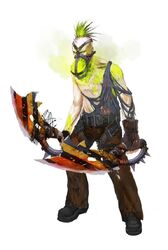 Concept Art of a Berserker with a puffball 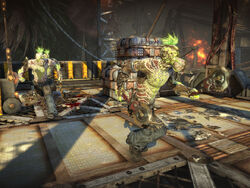 Berserker's with puffballs on the attack 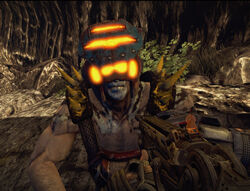 Close-Up of a Skull Flaregunner's Helmet
Add a photo to this gallery
Retrieved from "https://bulletstorm.fandom.com/wiki/Skulls?oldid=12146"
Community content is available under CC-BY-SA unless otherwise noted.