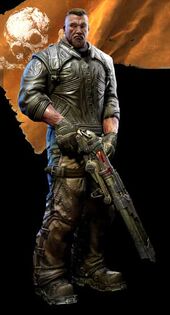 Rell “Le Pew” Julian is a French-Canadian explosives expert with a taste for booze and womanizing. Rell did poorly in school but showed a natural aptitude for blowing things up. Rell was chosen for Central unit by General Sarrano. Rell has been docked as many paychecks as he’s earned while under the command of the General.

If you’re “in the shit”, Rell is the guy you want on your side. He operates a large grenade launcher and is a whiz with explosive traps. He’s fearless, the first guy shooting every time — sometimes when he shouldn’t. Post Dead Echo, Rell and Grayson Hunt have a close friendship born from a mutual love of being intoxicated. They are stereotypical skirt chasing, fighting, filthy, drinking buddies.

Rell was part of the team of soldiers called Dead Echo; unknowningly assassins, led by fellow soldier Grayson Hunt. Rell, along with other Dead Echo members were unknowingly being manipulated by their commanding officer General Sarrano to kill innocent civilians which Sarrano told Dead Echo were criminals. It wasn't until Dead Echo assassinated the reporter Bryce Novak and Ishi Sato read an article written by Novak on Sarrano's corruption that they realized that Sarrano had tricked them into killing innocents. In response, Grayson contacted Sarrano and the general revealed that he tricked them into killing civilians. When Grayson angrily destroyed the communication device, Rell suggested they betray Sarrano, which Grayson complied as Bryce's young daughter entered the room and Ishi calmed her down before a small squad of Confederate soldiers stormed in and attacked Dead Echo, but they fought them off while defending Novak's daughter. After rescuing Novak's daughter, Rell and Dead Echo ultimately escaped the planet and became pirates, occasionally raiding Confederate supply lines. Ten years later, After interrogating a bounty hunter hired by Sarrano to kill Grayson and ejecting him into space, Rell and Grayson met with Ishi and Whit Oliver on the bridge of their ship and found the Confederate flagship the Ulysses orbiting the planet Stygia and Grayson considered this as a chance to get revenge on Sarrano for tricking them and ordered Dead Echo to attack the Ulysses. After badly damaging the Ulysses, the flagship opened fire and disabled the front cannons of Dead Echo's craft. Grayson quickly crashed the ship through the Ulysses and crashlanded on Stygia. Rell and the crew survived the crash, but Ishi was gravely injured. Rell noticed escape pods ejected from the Ulysses and went with Grayson and salvaged power cells from the engine of a damaged escape pod while fighting off an insane gang called the Skulls. After returning to the wreckage of their ship, Oliver used the power cells to repair Ishi into a cyborg and installed an AI unit into Ishi's brain before the Skulls broke in and killed him. Rell and Grayson attempted to fight off the Skulls, but Rell was wounded. As the Skulls taunted Rell, the cyborg Ishi dragged Grayson away, but not before Rell tossed Grayson his gun and Grayson used it to cause an explosion that killed Rell along with the Skulls. Ishi also mentioned that Rell was a war hero when Grayson and Ishi fought Sarrano.

Rell Julian's information
Add a photo to this gallery

Retrieved from "https://bulletstorm.fandom.com/wiki/Rell_Julian?oldid=11153"
Community content is available under CC-BY-SA unless otherwise noted.