Start a Wiki
The Penetrator is a weapon in Bulletstorm. It shoots a rocket-propelled drill that impales enemies and will stick them to surfaces, other enemies, or send them into the sky.

Once charged, two things can be done: the weapon can be used as a melee weapon if rammed into an enemy (sliding into two or more enemies using this method will grant the Drilldo Skillshot) or the charged drill can be controlled when inside an enemy's body by pulling the trigger while aimed something or someone else.

If you leave the body in mid-air then you may kick the body and send it hurtling towards oncoming enemies, impaling their friend onto them as well. When fighting minibosses, you can launch the drill into the stomach of the boss and then kick it even further in their belly, killing them. Another thing that you can do with minibosses is when the boss is stunned, you can go behind him and kick him, doing so will make his butt cover to fly up. If you shoot the Penetrator into that area before the cover falls down, you will get a nasty surprise instead of the usual flame like on the Fire in the Hole Skillshot.

The following are the known Skillshots unique to the Penetrator weapon. 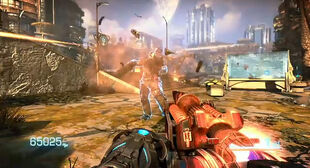 Penetrator charged up
Add a photo to this gallery

Retrieved from "https://bulletstorm.fandom.com/wiki/Penetrator?oldid=11652"
Community content is available under CC-BY-SA unless otherwise noted.