Start a Wiki
"He is megacharged with elite Confederate weaponry!" - Ishi Sato

Minibosses are powerful members of the Skull Gang. They are some of the most powerful enemies in Bulletstorm, possessing bigger guns, and many more hitpoints. In addition, 2 of the 3 types are clad in bulletproof armor that must be destroyed before you can damage them.

Three variants of these minibosses exist.

Chaingunners are armed with Chainguns and have no body armor.

Cannoneers are armed with Bouncers, armor's weakness is the ammo pack on their backs.

Drillers are armed with Penetrators, armor's weakness is the electrified belts on their waists. (Attempting to leash or melee Drillers, who have their belts intact and are not stunned, will cause you to be painfully electrocuted)

Touchdown - Thump a miniboss to death.

Fire in the Hole - Stun a miniboss, kick his buttplate, and shoot his exposed ass.

Kick Off - Stun a miniboss, leash his helmet, stun him again, and kick his head off.

Stomach Pump - Once a miniboss' armor is removed, hit him with a Charged Penetrator drill bit, then kick the drill bit. 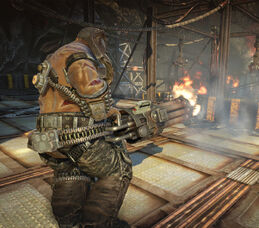 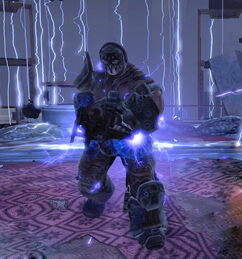 Penetrated!
Add a photo to this gallery
Retrieved from "https://bulletstorm.fandom.com/wiki/Miniboss?oldid=12087"
Community content is available under CC-BY-SA unless otherwise noted.