The Hyper-Mutated Flytrap is first encountered at the beginning of Act 4 Chapter 2 "Maneaters Prefer Tight Spots." Ishi runs ahead to open a gate blocking the path and immediately yells for Grayson's assistance. However, once Grayson arrives at the top of the stairs, he can only look on helplessly as Ishi is swallowed by a huge plant-like tentacle. Trishka tells Grayson that his "dickish pal is dinner." Grayson refuses to leave until he sees a body. Just then, Grayson receives a signal being put out by Ishi from inside the Flytrap. Grayson and Trishka follow the signal to a large, circular room, possibly a greenhouse. In the center of this room awaits the Hyper-Mutataed Flytrap and the tentacle that grabbed Ishi. As Grayson approaches, the plant wakes up and begins attacking. It is vulnerable when its mouth is open and when its extremities are glowing red. There are several phases to the battle. It starts with large inflated pods on its torso that must be destroyed, followed by tentacles that spring from where the pods were, and finally the area around its neck. These areas can only be hit while they are glowing red. During the fight, the plant will kick up pollen that has a similar effect as the puffball, causing blurred vision. In between each phase, the player must weaken the creature by shooting its mouth and/or tentacles. The floor is also wet, making sliding around the creature very easy, and allowing the player to grab ammo and heal while avoiding damage. Once the Flytraps is dead, you will receive the Weed Killer skillshot and achievement. Ishi is safe and sound, but "landed in plant poop," as Grayson jokes.

In the room with the Hyper-Mutated Flytrap, the player can slide around the plant for as long as they want, probably because the floor is muddy and slippery. Also, press "R" when using the PMC to reload the gun, and press it again to get 50 bullets, up to your max ammo capacity. 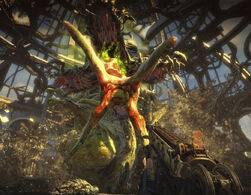 The tentacle that ate Ishi 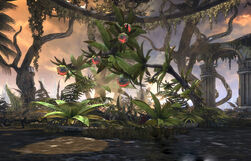 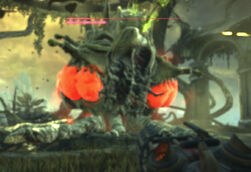 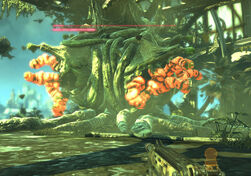 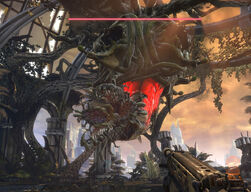 Phase 3
Add a photo to this gallery
Retrieved from "https://bulletstorm.fandom.com/wiki/Hyper-Mutated_Flytrap?oldid=10198"
Community content is available under CC-BY-SA unless otherwise noted.