Heavy Echo is the private army of General Sarrano. They are tougher than any other "standard" enemy in the game and are the only enemies encountered in the final act of the game. They are much tougher than previous enemies, possessing military body armor and PMCs. Heavy Echo troops are the only enemies in the game with the ability to use the PMC's Annihilator charge function. Unlike Final Echo, Heavy Echo troops are not outfitted with Energy Leashes.

Trishka brags about having "designed" them and when shot, they bleed a yellow fluid. It is possible that they are not completely human, possessing synthetic qualities. 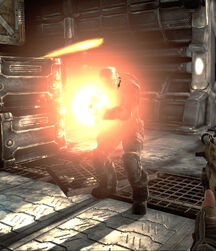 A Heavy Echo charging his PMC 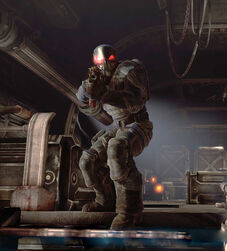 Aiming a gun
Add a photo to this gallery
Retrieved from "https://bulletstorm.fandom.com/wiki/Heavy_Echo?oldid=12015"
Community content is available under CC-BY-SA unless otherwise noted.