Grayson Hunt is the protagonist of Bulletstorm. When Dead Echo members Grayson Hunt and Ishi Sato discover that they had been working for the wrong side, they betray their squad commander and end up being exiled to the far edges of the galaxy. Players take the role of Grayson Hunt a few years after his exile, who has since become a drunken space pirate thirsty for blood. He ends up getting involved on an interstellar crash landing in an encounter with their old squad commander. Grayson Hunt and Ishi Sato discover on the planet that they are surrounded by hordes of hostile mutants and crazed cannibalistic gangs in an abandoned paradise. They decide to work together once again to get off the planet alive and take revenge on the man who stranded them in this defiled paradise.

Grayson Hunt was the leader of Dead Echo, an elite band of soldiers and the pride of General Sarrano's army. After a revelation of the true nature of the work they did for Sarrano, Gray and his team went AWOL and have since become a band of rogue pirates. Extremely cynical, resentful and harbouring a drunken disposition, Gray is pissed at the world, a ticking time bomb ready to explode at any second, which makes him both a dangerous and a skilled soldier to be reckoned with.

His gun is as dry as his sarcastic wit. Gray often acts first and never thinks about the consequences. Fighting is what keeps him busy and helps him forget about what happened in the past. Gray was seen battling the Ulysses, the warship of General Sarrano before both men went down in flames. After landing on the planet Stygia, Gray is forced to find his way off the planet while, in the meantime, teaming up with some rather unusual partners. Gray was last seen in an escape pod with Trishka on his way off of Stygia. 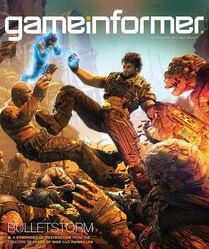 Grayson featured on a cover of Game Informer magazine

Grayson in the thick of the battle 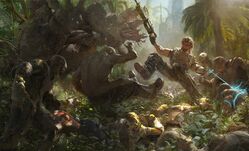 Some concept art of Grayson
Add a photo to this gallery
Retrieved from "https://bulletstorm.fandom.com/wiki/Grayson_Hunt?oldid=11940"
Community content is available under CC-BY-SA unless otherwise noted.