Start a Wiki
The Gravity Boots are an improvised weapon in Bulletstorm that allows the user to attach themselves to buildings or can repel enemies if kicked or slid into. A kick is an attack that can be done with the Gravity Boots. By pressing Circle (PlayStation 3) or "B" (Xbox 360) or "E" (PC), Grayson Hunt or your character in anarchy will perform a forward kick, sending the target flying. A slide is basically the same thing as a kick, but Grayson does a "homerun" style slide to kick an enemy. The kick is the only melee attack Grayson possess, unless one counts sliding as a separate attack. It slows enemies down for a few seconds in a Gravity flux field, which makes getting skillshots easier (except Burnouts, which just fly away from you). It is one of the easiest ways to push enemies back next to the boneduster shotgun. The Kick is used for many Skillshots such as Bullet Kick and Voodoo Doll.

Players can also kick hazards into enemies such as explosive barrels, a charged Cannonball, even other enemies with a flail attached to them. When an enemy is kicked they automatically lean towards an eviromental hazard though this doesn't mean players shouldn't aim their kicks. This also works the other way so when players kick environmental hazards towards enemies they will fly towards foes. Sliding towards an enemy will also cause the player to kick him though these enemies usually fly closer to the ground. Many enemies can avoid kicks from the player like the flaregunner and all the creeps. You may be lucky to kick a fast opponent but at the same time you may get shot or attacked by other opponents so try to avoid target fixation. 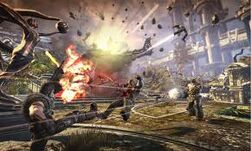 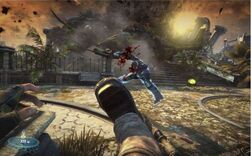 Add a photo to this gallery
Retrieved from "https://bulletstorm.fandom.com/wiki/Gravity_Boots?oldid=10581"
Community content is available under CC-BY-SA unless otherwise noted.