"Entirely custom-built, the Flailgun is a lethal tool that fires two high impact grenades linked by a steel chain. This flail chain wraps around a target, rendering them completely helpless. The user can then denonate the explosives whenever they like. Enemies or objects can be wrapped then kicked towards groups of enemies and detonated for mass destruction. Charging the weapon will superheat the flail chain, turning it into a razor that will slice through any enemy in its path."

The Flailgun is a weapon featured in Bulletstorm. It fires two grenades that are strung together by a chain

which will detonate after a few seconds but can be activated early by a button on top of the gun. The Flailgun's alternate fire is activated by pulling a lever located on the top of it, making fire shoot out of the pipes on the gun super-heating the chain, causing the chain to cut through enemies like butter. Tying an enemy up with the flail gun and kicking them into a crowd of enemies will result in the Gang Bang and/or Homie Missile or Smart Mine skillshot. Also, firing the Flailgun at an enemy's head and detonating it gets the Grenade Gag skillshot.

The following are known skillshots unique to the Flailgun weapon 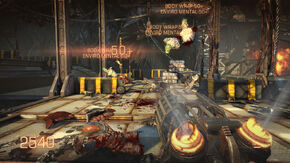 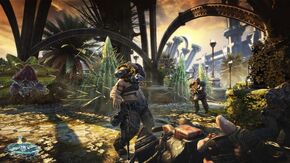 The trigger in Grayson's hand

Community content is available under CC-BY-SA unless otherwise noted.