"None of these fools measure up to Dead Echo."— Ishi Sato

Dead Echo was an elite band of assassins protecting the Confederation under the direct command of General Victor Sarrano. Dead Echo went rogue after discovering that General Sarrano had been lying about the targets they were tasked with eliminating. Instead of highly dangerous criminals, they had in fact been killing innocent civilians with evidence of the government's (most likely Sarrano's) corruption. After turning rogue they became pirates, attacking Confederation supply lines. They now each carry a bounty of half a billion Confederation currency. 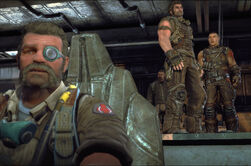 Dead Echo before the assault on the Ulysses
Add a photo to this gallery
Retrieved from "https://bulletstorm.fandom.com/wiki/Dead_Echo?oldid=10892"
Community content is available under CC-BY-SA unless otherwise noted.