The Creeps are the Skulls' rival gang. They are former above ground residents of Stygia who fled the convict uprising to the underground, where they mutated due to exposure to radioactive waste, the by-product of the protection mechanism that shielded civilization from the radiation storms that ravage Stygia. The exposure also caused them to mentally deteriorate, turning the residents into highly aggressive, nearly animalistic psychopaths with a hatred of humans. The gang survives through cannibalism, like the Skulls. The Creeps are at war with the Skulls. They are extremely fast and will dodge Kicks and Leash grabs (they do not dodge sliding collisions), but seem to be weaker than the Skulls. The Creeps have snipers that are very skilled and dangerous. They seem to be less "civilized" than the Skulls, the other faction of Stygia, but more so than the Burnouts. They are the second faction you encounter on Stygia, after the Skulls and before the Burnouts. They will mutilate any Skull they find and display them on spikes or other objects.

Due to exposure to Gamma radiation, the Creeps have no skin and their whole bodies are covered with nothing but orange exposed muscle.

Creeps can be killed by any weapon or hazard, however, there are certain considerations to observe. 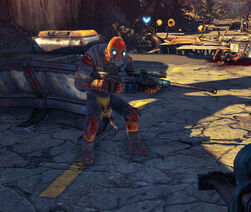 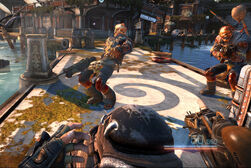 A Creep dodging a kick

I wonder who lives here... 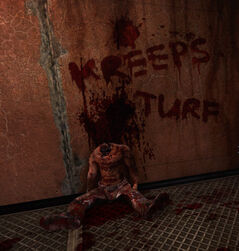 Where's your head at?

Creeps' Carnage
Add a photo to this gallery
Retrieved from "https://bulletstorm.fandom.com/wiki/Creeps?oldid=12147"
Community content is available under CC-BY-SA unless otherwise noted.