Burnouts are fully mutated humans that have poisonous pus sores on their bodies, which are their only weak spots. In order to kill them, you must target the poisonous pus sores or use the environment. Some Burnouts have these sores on their asses. Burnouts give away their position by howling or making low growling sounds, but some times they can be more stealthy so paying attention to the surroundings is important.

Burnouts are first seen in Act 3, Chapter 1, in the crumbling tunnel, when the player has to press RMB. There, Gray shouted:"What was that?!".

Only two types of Burnout so far found in the game. Burnouts of both varieties seem impervious to the displacement field caused by the kick and slide attacks, however leash attacks do cause a displacement field.

Assplosion: (50 points) A shot to the glowing weakspot on the Burnout's ass. Kick them down and use the screamer to make this much easier.

Steady Hand: Gain a kill on a burnout by ONLY shooting its weak glowing spots. This can definitely be done with the PMC, Head Hunter, Screamer and Penetrator. It is the easiest with the Headhunter, as you can guide the bullet to the weak spot. Strangely, a charging Burnout will stand still and face you when you shoot him with the Headhunter. 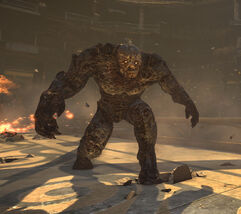 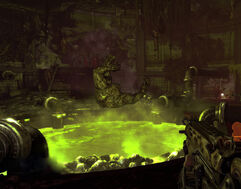 Retrieved from "https://bulletstorm.fandom.com/wiki/Burnouts?oldid=12119"
Community content is available under CC-BY-SA unless otherwise noted.