Start a Wiki
In the opening sequence of the game, Grayson and Rell are taunting a Bounty Hunter that they have caught. They have tied him up and taped an empty bottle to his head for target practice. The Bounty Hunter seems very frantic especially when Grayson drinks more and begins to point his weapon at him. After a short dialogue he shoots the bottle and Rell opens the door behind him, allowing Grayson to kick him back into the next room. Rell then shuts the door and opens the airlock, blasting the bounty hunter into space. When Grayson and Rell proceed to open the door on the far side of the room, the bounty hunter presses a nova grenade against the glass from outside, blowing himself and the window to pieces. 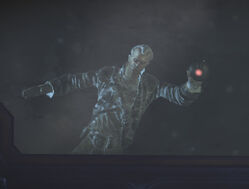 Nova Grenade!
Add a photo to this gallery
Retrieved from "https://bulletstorm.fandom.com/wiki/Bounty_Hunter_(Character)?oldid=11154"
Community content is available under CC-BY-SA unless otherwise noted.